Dumplings have become a holiday tradition in our family and I usually end up making a couple of batches at the start of the holidays.  They freeze well so the extras (if there are any) can be kept to fulfill any dumpling cravings later on.  I’ve used the Thermomix to chop and mix the ingredients together, but you could also use a food processor. 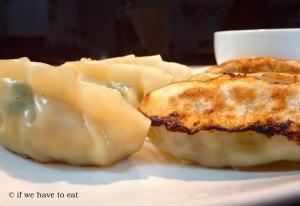 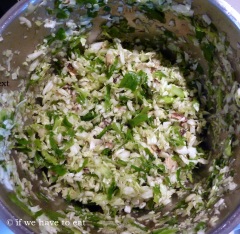 2. After 15 minutes, remove the mushrooms, trim off the tough stems and put them into the Thermomix bowl; set water aside

3. Add spring onions, cabbage, garlic and ginger into the Thermomix bowl and chop for 10 seconds/Speed 5; use the spatula to help the ingredients mix together

4. Add mince, soy sauce, corn flour and rice wine vinegar into the Thermomix bowl and mix for 10 seconds/Reverse/Speed 2 (or until mixed); remove the dumpling filling to a mixing bowl

5. To make the dumplings, put 1 heaped teaspoon of the mixture into the middle of a gow gee wrapper, fold in half and pinch the edges shut; getting rid of as much air as possible.  With the thumb and first finger of each hand, hold the dumpling by the edge at the centre-point.  Create a fold by moving the left hand behind the right hand and pinch tightly.  Repeat two times to the right of centre fold and two times to the left.  This allows the dumpling to sit flat.

6. To cook the dumplings, heat oil in a large frying pan on medium-high heat and place dumplings into the pan; making sure they don’t touch each other.  Fry until the bottoms are slightly browned.

7. Add one third of the mushroom water into the frying pan and add additional water until the dumplings are sitting in about 2mm of water.

8. Turn the heat down to medium and cover the pan to steam the dumplings until the water has evaporated.  Remove the lid and cook until the bottom of the dumplings are golden brown.

1. To help seal the dumplings, lightly dip a finger into a bowl of water and run along one-half of the edge of the wrapper.
2. In step 4, break up the mince before you put it in the bowl to make it easier to mix the filing. 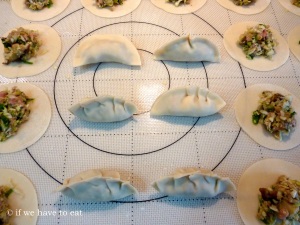 This entry was posted on January 5, 2014 by ifwehavetoeat in Mains, Snacks and tagged Feed a Few, Fry, Mains, Make Ahead, Meat, Recipe, Snacks, Thermomix.