Since the pork, pine nut and spinach parcels worked out so well, I thought I’d try it again with chicken, mushroom and spinach.  In this recipe, corn flour is used to give the filling a bit of a sauce.  However, the mixture shouldn’t be too wet, otherwise the parcels will fall apart.

1. In a mixing bowl, add chicken, cornflour, salt and pepper and stir to combine

2. Add onion and garlic into the Thermomix bowl and chop for 3 seconds/Speed 4

3. Scrape down the sides of the bowl, add oil and cook with the measuring cup (MC) off for 2 minutes/Speed 1 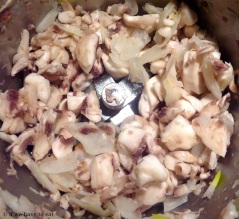 4. Add mushrooms and chop for 10 seconds/Speed 3

5. Add chicken and cook with the MC off for 15 minutes/Varoma/Reverse/Speed soft

6. Add stock and spinach, stir into mixture and cook with MC off for 5 minutes/Varoma/Reverse/Speed soft

7. Remove mixture to the Thermomix basket and strain over a small bowl to catch any extra liquid while cooling the mixture; stir occasionally

8. Once the mixture has cooled, make the parcels by taking a sheet of filo pastry and fold in half

9. Put 1/6 of the meat mixture into the centre of the pastry and form into a loosely packed rectangle about 2cm high

10. Fold in the sides of the pastry on the short side and then fold up tightly into a parcel

11. Repeat with the remaining 5 pieces of pastry

12. Heat oil in a large frying pan over medium heat, turn down to medium-low/low and place each parcel into the pan and cook until both sides are golden brown

Make sure the parcels don’t brown too quickly.  Otherwise, the pastry won’t get a chance to cook.  Turn the heat down if the parcels are getting too brown

This entry was posted on September 23, 2013 by ifwehavetoeat in Mains and tagged Mains, Poultry, Recipe, Thermomix.