There are no strict rules for stir fry – at least not the way that I make them.  I usually free pour on the marinade so don’t worry about being too exact – it depends on your preferences.  The only thing I wouldn’t overdo is the rice vine vinegar as it can be overpowering.  Also, make sure all of the meat has a light coating of cornflour otherwise you won’t get enough sauce.  For me, the more vegetables, the better – by removing the meat and cooking the vegetables separately, I find I can keep them crispy. 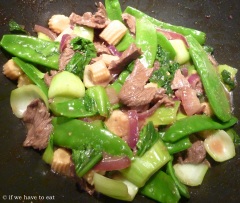 600g meat (I usually use rump steak or chicken breast)

2 tsp grated ginger (mine comes from a jar)

1. Thinly slice meat and put it into a glass mixing bowl

2. Put garlic, ginger, cornflour, soy sauce and rice wine vinegar into a mixing bowl and stir with meat to combine

3. Heat vegetable oil in a large frying pan or wok on medium-high heat and sauté onions for about 2 minutes or until soft

4. Add meat and fry until just cooked through, stirring occasionally

5. Add water to meat and heat until boiling.  It will mix with the cornflour in the meat to make a sauce

6. Without putting the heat out, put the meat into a fresh mixing bowl

7. Add the vegetables into the frying pan and heat until just cooked through and still crisp, stirring occasionally

8. Add meat back into the frying pan and mix with vegetables until sauce is bubbling

9. Sprinkle with sesame oil to serve 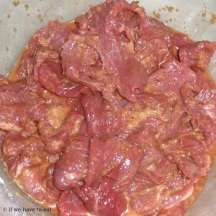 1. Want to feed more people? Just add more meat and veg!  I use about 150g of meat per person for dinner and about 100g for lunch.

2. Want leftovers?  Heat onions and meat per instructions but only heat half the vegetables.  After cooking the vegetables, only add back half of the meat.

3. Sauce is too watery after Step 4?  Mix 1 heaped teaspoon of cornflour and 2 tablespoons of cold water in a mug and pour into the frying pan.  Stir to incorporate with the meat and as the liquid heats up, the sauce should thicken.

1. Change the vegetables – choose whatever vegetables you have in your fridge!  Just make sure you cut them to suit the cooking time – carrots take a while to cook, so slice thinly.  Or, if the vegetables don’t take as long to cook, then add them a bit later (e.g. sliced mushrooms) – here are some suggestions:

This entry was posted on May 13, 2013 by ifwehavetoeat in Mains and tagged Easy, Feed a Few, Fry, Mains, Make Ahead, Meat, Poultry, Recipe.