The first time I used the Thermomix to steam meat was for the Vietnamese meatball recipe on the Thermomix Recipe Community.  I’ve used this as inspiration for this Italian-style meatball dish.  I like to keep my red meat intake to once or twice a week, so I’ve used chicken breast here.  Instead of breadcrumbs, I’ve used finely chopped mushrooms.  The ragout is a rich sauce designed to provide the vegetable content for the dish. 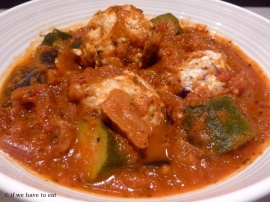 1. Chop onion and garlic in the Thermomix for 3 seconds/Speed 5

2. Chop mushrooms in the Thermomix for 8 seconds/Speed 3

3. Scrape down the sides of the Thermomix bowl, add chicken breast, paprika, parsley, salt and pepper to the bowl and mince by closing the lid, with MC on, and holding Turbo for 1 second; repeat 3 times

4. Make the meatballs by rolling the meat mixture between the palms of your hand and forming into balls about 3cm wide

5. Put meatballs in the Varoma on both bottom and top trays; leaving about 1cm gaps between them.  Set aside

7. Scrape down sides, add oil and sauté with the measuring cup (MC) off for 3 minutes/100C/Speed 1

8. Add 1 can of diced tomatoes, tomato paste, stock, herbs, salt and pepper into the Thermomix and cook for 10 minutes/100C/Speed 2 with MC half off

10. Add the ½ onion, zucchini, eggplant and can of diced tomatoes into the Thermomix, close lid and put the Varoma on top.  The bowl may be quite full, but will shrink as the eggplant cooks

Serve with 1 cup of couscous cooked to package instructions

Make the ragout without the meatballs and serve as a chunky vegetable sauce with pasta.  Just follow steps 6 to 11 and in step 10, put the MC half on instead of putting the Varoma on top

This entry was posted on May 26, 2013 by ifwehavetoeat in Mains and tagged Feed a Few, Mains, Make Ahead, Poultry, Recipe, Thermomix, Varoma, Vegetables.