The recipe makes some lovely soft pillows of prawn goodness!  This time, I’ve steamed the dumplings in the Varoma and served with a dipping sauce.  Next time, I’d like to try them in a soup so keep an eye out for that. 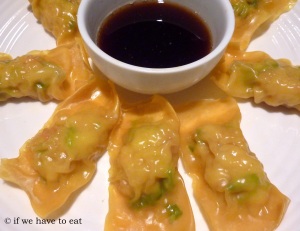 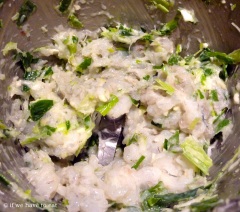 1. Add spring onion, garlic and ginger into the Thermomix bowl and chop for 3 seconds/Speed 5

2. Scrape down the sides, add prawns and cornflour and chop for 4 seconds/Speed 4

3. Remove mixture to a bowl

4. Add soy sauce and rice wine vinegar to the mixture and combine with the spatula

5. Lay a Thermomat or silicon baking sheet on the counter and spread out the wonton wrappers (you will have to do this in batches)

6. Put 1 tsp of prawn mixture into the centre of each wonton wrapper 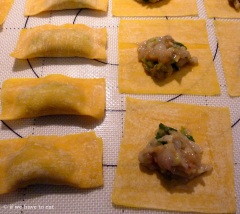 7. To make the wontons, use your finger to brush the edge of one half of the wrapper with a bit of water; fold the wrapper in half – squeezing out any air

8. Place wontons into the Varoma bowl and tray; making sure they don’t touch each other

9. Add 500g water into the Thermomix bowl, close the lid, assemble the Varoma and cook for 12 minutes/Varoma/Speed 2

10. Mix sauce ingredients together to serve

This entry was posted on October 7, 2013 by ifwehavetoeat in Mains, Snacks and tagged Feed a Few, Mains, Recipe, Seafood, Snacks, Thermomix, Varoma.