I’ve had the idea for this recipe in my head for a while now and finally got a chance to put it down on paper.  This is an easy, all-in-one dish using the Varoma to steam the chicken and vegetables, while cooking the rice in the Thermomix basket. 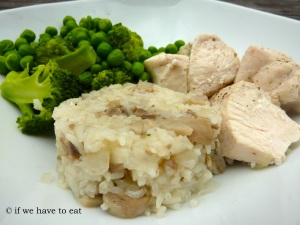 1. Put onion in the Thermomix bowl and chop with the measuring cup (MC) off for 3 seconds/Speed 5

2. Put mushrooms into the Thermomix bowl and chop with the MC on for 8 seconds/Speed 3

3. Put the rice in the Thermomix basket and add onion and mushrooms; stir to combine

4. Put 600g of water and stock into the Thermomix bowl, insert basket and close the lid

5. Put chicken around the edges of the Varoma bowl (make sure to leave the most of the holes uncovered in the middle); season with salt and pepper

6. Assemble the Varoma, put it on top of the Thermomix and cook for 10 minutes/Varoma/Speed 4

7. Move chicken around in the bowl to make sure it cooks evenly, put vegetables into the Varoma tray, add to the Varoma and cook for a further 10 minutes/Varoma/Speed 4 (or until the chicken is cooked)

1. If making ahead, leave the vegetables out and add them to the lunch container.  They’ll cook when you reheat the chicken and rice

1. The liquid left in the Thermomix bowl makes a great soup or stock, so either grab a mug or freeze it to use at another time

This entry was posted on December 15, 2013 by ifwehavetoeat in Mains and tagged Easy, Feed a Few, Mains, Make Ahead, Poultry, Recipe, Thermomix, Varoma.