I’ve been trying to include more vegetarian dishes into our diet and here’s one of them. I’ve used the same spices as the chicken korma recipe but have substituted the chicken with sweet potato.  Also, unlike the chicken version, I’ve managed to fit everything into the Thermomix bowl so there’s less cleaning up to do! 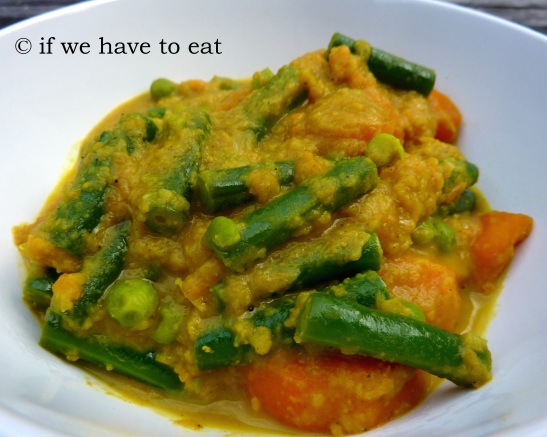 Salt and pepper, to season

2. Put onion, garlic and ginger into the Thermomix bowl and chop with the MC on for 10 seconds/Speed 7

3. Scrape down the sides of the bowl, add oil and ground spices into the Thermomix bowl and cook with the MC off for 8 minutes/Varoma/Speed 2

4. Add bay leaf, stock concentrate, sweet potato, carrots, salt and pepper and 200g of water to the Thermomix bowl, stir to combine and cook for 15 minutes/100C/Reverse/Speed soft with the Thermomix basket sitting on top of the Thermomix lid

1. Serve with basmati rice or quinoa

This entry was posted on December 14, 2014 by ifwehavetoeat in Mains and tagged Curry, Mains, Make Ahead, Recipe, Thermomix, Vegetables.